James Jones and Sons Ltd has again donated timber to students at Kingston University to help them explore the processes of designing and building with wood.

The architecture students from Studio 3.2 at the University, led by tutors Takeshi Hayatsu and Simon Jones, will collaborate with the Stanley Picker Gallery to install a wooden temple structure in the garden of Dorich House, Kingston Hill. The Scottish grown spruce was supplied from James Jones' Lockerbie Mill.

Coinciding with an event called ‘History in Making’ at Dorich House in February 2015, this is the second occasion that the Studio will work with Stanley Picker Gallery to build temporary structures for local communities in the Kingston area.

The Studio has been building temporary wooden structures for last three years, as part of the on-going investigation into timber construction. All based upon historic timber structures from around the world, to date they have included, a footbridge from Kintaikyo, Iwakuni Japan, the spire formwork from Salisbury Cathedral, England, and the Woodland Cemetery Chapel, Stockholm Sweden. This year, the Studio will build an interpretation of the Temple Gate from Todaiji Nandaimon, Nara, Japan. 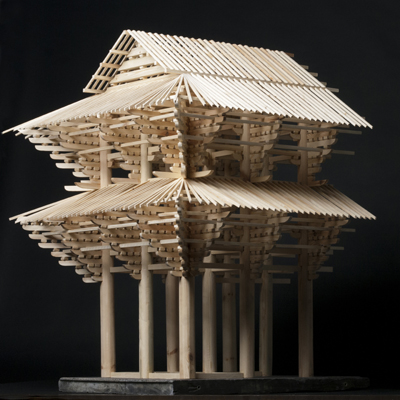 Todaiji Nandaimon gate in Nara is an enormous wooden structure built in 1199, under the direction of the Buddhist monk Chogen (重源). Chogen utilised the Chinese style of timber construction method called Daibutsu-yo, characterised by horizontal beams mortised through massive round columns creating stacked cantilevered supports the overhanging roof eaves. It is a listed UNESCO World Heritage Site as ‘Historic Monument of Ancient Nara’.

The Studio plan to build half of Nandaimon at 1:5 scale using standard treated timber sections without nails or screws. The original building has 18 solid timber columns that are almost 1m in diameter and over 20m tall. The Studio’s version will have 9 columns on a 2m square footprint supporting a roof 5.5m above ground level.

The temple structure will provide a shelter in the garden of Dorich House once it is installed. The project is not only for the third year students to learn about traditional Japanese architecture through making, but also for a wider community beyond the University to enjoy the beautiful orchard garden at Dorich House.

The students find the opportunity to work with timber on a project like this rewarding and enjoyable. We are extremely grateul to James Jones for their continuing support for our School of Architecture."
Takeshi Hayatsu,