James Jones and Sons Ltd has started work on a major investment programme totalling more than £4 Million at its Timber Systems Division plant at Forres,

This is where it manufactures the company’s ‘JJI-Joist’ engineered wood range. Since acquiring the old SEIL building adjacent to the James Jones site, the company has undertaken a detailed planning and due diligence exercise prior to the SEIL building being demolished and work on a replacement building starting.

The new facility is going to house a new £2.5m finger-jointing line purchased from Canada, which will allow James Jones to significantly increase its output of JJI-Joists to meet the increasing levels of UK house building.

JJI-Joists are currently the UK market leading I-Joist, and are used by all the major house builders across the UK. They are increasingly being used in public buildings such as schools, hospitals and hotels which require longer roof spans, and where ease and speed of construction and the need to meet tough environmental targets are becoming more important.

In addition to the state of the art finger jointing line, a new biomass boiler is being installed which will supply all the heating requirements for the site and which will reduce both energy costs and greenhouse gas emissions. In addition, a new dust extraction and ventilation system is being installed as well as improvements to the site layout to make vehicle movements easier and give a better traffic flow for deliveries and despatches.

“This is a really exciting time for James Jones and Sons in Forres. The UK housing market is recovering and there is an increasing need to build affordable, energy efficient homes across the UK as fast as possible. Our JJI-Joist is ideally suited to help the house builders meet the challenge. The investment at this site will double our capacity and will allow us to keep up with demand both now and into the future, and cement our position as the UK’s first choice supplier of I-Joists.

It’s great news for everyone at the plant and good news for the local area.” 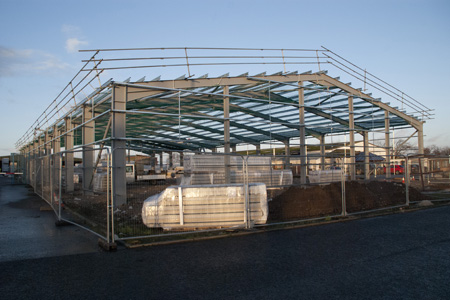